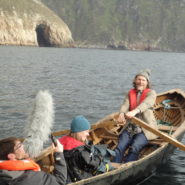 This weeks episode of Muintir na Mara sees Pádraig Ó’ Duinnn continue his journey of the Galway coast.  RTE 28th July 10:30 am. Pádraig visits  Brian Ó Carra who shows him the traces of the recently discovered ‘drowned bog’ on the beach in Bearna. Brian  shows Pádraig where they discovered evidence of fresh water lakes and bog under the sand. Most exciting was the day  they  dug up an ancient canoe. Padraig then travels to what was an abandoned 17th century village near  Spiddal that has been transformed into a cultural retreat by Dearbhaill Standún and her husband Charlie Troy. Concsuain has won an intetrnational award for its uniqueness in fostering traditional Conamara traditions. We later meet Jim Horgan who set up Bádóirí Lurgan who as well as running the community boatclub also  teach the art of the shipwright to young people. Members learn  how to sail and how to build their own boats. Padraig finishes this episode when he travels to Lochan Beag to meet Noel Ó Tuairisc who spent his life on large fishing vessels but now has a veritable museum and one of the most interesting collection of sea shells you will ever see. 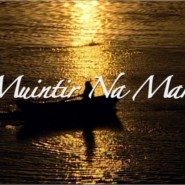