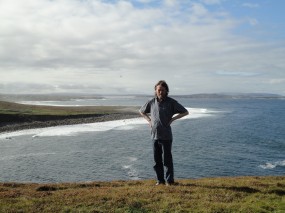 In this final series Pádraig Ó Duinnín, a boat builder from Cork. travels by boat, bicycle and van around the stunning coast of Donegal.

This week Pádraig watches the All Ireland semi final in Leitir Mac an Bhaird. travels by boat to Inis Caorach and Arann Mór and finishes this leg of his journey in Bunbeg.

The start of the programme sees Pádraig  arrive into Leitir Mac an Bhaird just as the All Ireland football semi-final between Dublin and Donegal is about to kick off. He finds the community gathered in the local pub, from kids to granddads, cheering on the county team. He meets with Sarah Ní Lochlainn and Thomas Monds and finds out about what it is that makes this part of the world a special place for them.

After the disappointing defeat at the hands of the Dublon team, Pádraig rows out to Inis Caorach with Hugh Gallagher. Hugh was born in Inis Caorach, which is now deserted. There are 4 restored houses on the island now; his son is building one of them. The island was

deserted between 1949 and 1952. There was an old pier there that was washed away, heavy emigration, and the lack of men to man the boats led to the island being deserted. There was a new pier built 4 years ago, so it’s much more accessible now. Hugh is a boat builder also and built a 28ft wooden boat which is in his yard, He tells Pádraig stories about the island and its history and people.

Then it’s onto Arann Mór with Pádraig to meet up with RNLI volunteer Nora Flannagan. Nora is full of life, great fun and craic in her. She works in the Health Care Centre on Arann Mór,. She is the first women crew member in the 127 years of the RNLI on Aranmore. The RNLI was established on

Aranmore in 1883 with moneys donated by Rev. Vendalure of Merrion Sq Dublin. This first lifeboat was named in his honor. It was a rowing and sailboat. They have a Severn lifeboat now, named Myrtle Maud. There are 21 crew, 2 fulltime and 19 volunteers. Nora shows Pádraig around the lifeboat station and he gets to see a training exercise with the lifeboat and helicopter in action.

Pádraig arrives into Bunbeg to complete this leg of his journey and meets with master boat builder Jim Boyd and artist, writer and boat builder, Donal Mac Polin who has a wealth of knowledge about curraghs in Donegal and has written extensively about them. Jim has built many boats over the years and out in his shed at the back of his house, he shows Pádraig around and tells him stories of the boats and the journeys he has taken in them.