Sé Merry Doyle’s documentary ‘Lament for Patrick Ireland’ records one of the most political gestures ever undertaken by an Irish artist. On the 20th May 2008 a most extraordinary event took place in Dublin. An eighty year old artist called Brian O’ Doherty came back from New York, where he has been living for the last 50 years, to kill off his alter ego, Patrick Ireland.

An effigy was made of Patrick Ireland and he was then buried  in the grounds of the Irish Museum of Modern Art in a ceremony attended by over  five hundred people.

It was a hugely resonant and emotional happening as Patrick Ireland had been created over 35 years before as a symbolic gesture of protest after the events of ‘Bloody Sunday’ in Derry when the British Military murdered thirteen unarmed  people during a peaceful march for Civil Rights. At that time Brian O Doherty vowed that he would stay in the character of Patrick Ireland for as long as it took for the British Army to leave Ireland and for Civil Rights to be ensured for all.

The film will view as part of the VIEWFINDERS FILM FESTIVAL on the 31st of March in Ballyvaughan County Clare. The film was fully funded by the Irish Film board. 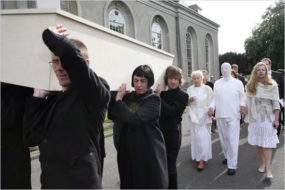