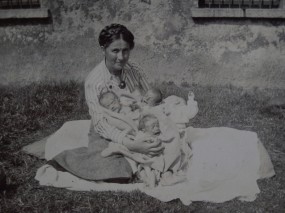 When Sé Merry Doyle’s documentary ‘Kathleen Lynn – The Rebel Doctor’ was first screened on TG4 on Easter Sunday 2011 the reaction was extraordinary. All the reviews questioned how did it come to pass that Kathleen’s remarkable life, both as a Republican and a doctor, who dedicated her life to the poor of Dublin was largely unknown.  The film is based on Kathleen’s diaries that start in 1916 when she was arrested after commanding a unit of James Connolly’s Citizen Army who attempted to take over City Hall.

The Diaries tell a story of  how this privileged daughter of a West of Ireland Protestant Bishop became a rebel in 1916 and then spent the rest of her devoted to the first infants hospital in Ireland, Saint Ultan.  The part of Kathleen Lynn is played by the great Irish actress Ingrid Craigie.    Now you have another chance to view this film on Easter Saturday at 7:15.
For more info on Kathleen Lynn click here