Skip to content
The city is a dream
A nightmare, a daydream,
A song half remembered
Alive Alive O
The film was premiered at the Cork Film Festival in 2001 and went to win an award at the Galway Film Fleadh and had screening at the Bilbao Film Festival – Spain, the Berlin Ethno Film Festival in Germany. in 2009 it was officially to represent Ireland  at the Doc Europa Festival in Lisbon, Portugal. 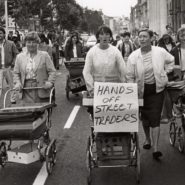 ‘Alive Alive O – A Requiem For Dublin’ is considered to be Sé Merry Doyle’s most personal film. Utilising an experimental mix of abstract visuals and poetry the film chronicles the demise of Dublin Street Traders whose Patron Saint ‘Molly Molone’ gave us the famous street call ‘Cockles and Mussels, Alive Alive O’. Through the spirit of ‘Molly Molone’ the film  demonstrates how an extraordinary culture has become increasingly fragile with the closing of marketplaces and a city that has sold its soul.

Shot in stages over many years, the documentary contains rare archive that captures the demolition of the tenement houses immortalised in the plays of Sean O Casey and a young U2 Live as they perform in the  “Inner  City Looking On” concert. There are poignant scenes of street traders being harassed off the streets by police and we witness the last day of trading in  ‘The Iveagh Market’. As one trader opines ‘whatever happened to Molly Molone and the city’s pride in her`?’. The maverick politician Tony Gregory recalls the time he went to prison for defending the street traders rights.

‘Alive Alive O – A Requiem to Dublin’ could be construed as a grim reminder of all we have so carelessly discarded in the heated pursuit of a glitzy new city. However, equally important to the film, is the portrayal of the staunch character and true-grit of the inner-city “Dub”, the tragic nature of which is enhanced by the haunting narrative from Paula Meehan and the voice of Frank Harte singing some of Dublin’s best known traditional ballads. Best film The Sunday Tribune 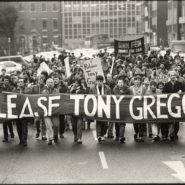 The poems of Paula Meehan, the songs of Frank Harte, the old photographs, the film clips from different times, different place – it all gelled beautifully. This was an important film. I could go on and about clichéd titles but at the end of day its what a film says that counts. And this said lots. It isn’t too late to save at least some of the heart of Dublin. Glass buildings wide thoroughfares, posh hotels and trendy bars don’t make a city. People do. And Sé Merry Doyle made that point very, very well indeed. – The Sunday Times